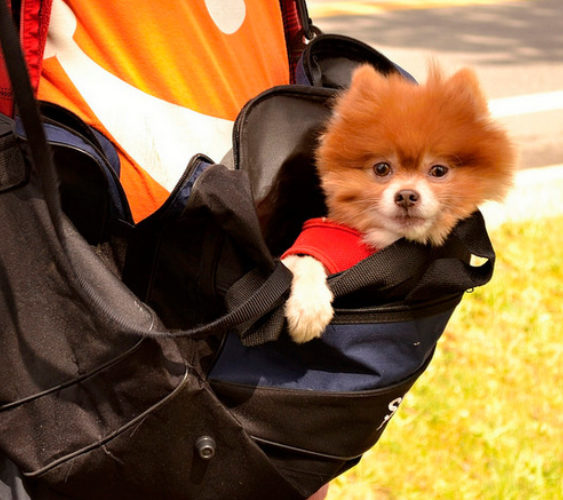 There are bogus trends, like this ridiculous New York Times article declaring that wearing a monocle is now in vogue. Then there are trends that make us think, "Hey, this is sort of interesting." We consider the rise of dogs — specifically small ones — and the decline of babies a trend that falls in the latter category.

From 1999 to 2013, the number of small dogs owned in the United States rose from about 12 million to almost 28 million. During that same period, the number of large dogs remained flat (at about 20 million) as did the number of medium sized dogs (about 24 million). Small dogs are definitely growing (sorry about that pun) more popular as time passes. As Pets International, a trade agency for dogs and cats reported recently, the small furballs are inheriting the Earth.

"The American Kennel Club classifies dogs into seven classes including sporting, hound, working, terrier, toy, non-sporting and hunting," explained their report, on the popularity of small dogs. "Their Top 10 list now shows the Yorkshire Terrier (a small breed) as the number two most popular dogs, passing a favorite: the Golden Retriever. In fact, there are five small breed dogs in the Top 10 including the Yorkshire Terrier: Beagle, Dachshund, Poodle and Shih Tzu."

Taking a look at a slightly bigger data pool, Roberto Ferdman over at Quartz notes that while people seem to want more dogs, they seem to be using them as replacement for babies. "Birth rates in the United States have fallen from nearly 70 per 1,000 women in 2007, to under 63 last year — a 10 percent tumble," reported the site. "American women birthed almost 400,000 fewer little humans in 2013 than they did six years before. The drop-off has come exclusively among 15- to 29-year-olds."

That demographic is key to this trend. "Women are not only having fewer children, but are also getting married later," Damian Shore, an analyst at a market-research firm, is quoted explaining in Ferdman's Quartz piece. "There are more single and unmarried women in their late 20s and early 30s, which also happens to be the demographic that buys the most small dogs."

These numbers all add up to the pretty convincing theory that more people in America than ever before are postponing having babies, and in their stead, buying small dogs. And hey, can you blame them? Babies are, as any parent would tell you, a lot of work. Way more than a dog, especially a tiny one.

Yet dogs aren't cats; they give people attention and love that they desire. In a study of over 15,000 dogs and their owners, researchers found that dogs connect with their humans in much the same way babies do with their parents. So buying a small dog as sort a bridge to having a baby is actually a pretty smart idea. It gives potential parents a taste of what having a baby is like. Then maybe, judging from how much they like that, they one day move on to having a kid. A pretty cool trend. Almost as cool as dogs wearing monocles. You read it here first.